The Tattoo I Never Planned On Getting

I bet you have a tattoo.

It’s possible you have not been hanging out in a tattoo parlor wincing as some dude named, “Clyde” etches a skull and bones onto your right bicep.

And yet, I bet you have a tattoo.

I say this as part of a triple confession.

Never have seen their charm.

Never have looked at someone who had one and thought, “Yep, they look better with that.” 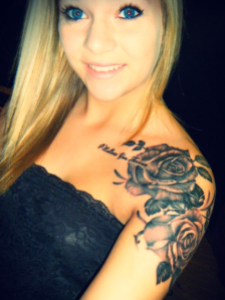 It’s possible tattoos are like modern art. I don’t get it, but there sure are a lot of folks who dole out a bunch of money who do.

And then there’s this–

This summer I got a tattoo.

Not a soaring butterfly or the name of my kids.

Well, like a Rorschach Test, you’d have to see for yourself.

See, I didn’t get this tattoo on purpose.

It happened one early summer night as I was making dinner for my family.

There I was–cooking up some salmon filets, as I often do (too often, if you ask my kids.) 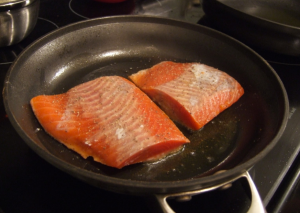 Flipped that fish over, just like I’ve done countless times.

That’s when the salmon took out its revenge, sending sizzling olive oil flying from the pan and onto my left wrist.

I knew right away I’d done a number.

I did what you’re supposed to do—ran it under cold water, put ice on it.

Until the blistering started.

Google told me I had second degree burns.

I never did go to the emergency room. I figured I could bandage it and put ointment on at home. 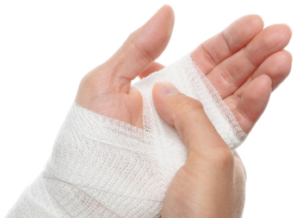 And through the miracle of human biology, I healed.

Now, there’s just one, nasty, not attractive-at-all scar which sits on my left wrist like, ironically enough, a modern art painting splat in the shape of a half bracelet

You can even still see the marks where the searing oil dripped down my skin.

“What are you going to do about that?” I’ve had more than one person ask me.

For now, the answer is pretty clear—

I look at that scar, and though ugly as it is, I smile.

It reminds me that this formerly single gal who couldn’t even boil water now has a family.

A family I cook for every night.

A family who actually thinks I’m a good cook.

(The salmon was delicious, by the way.)

If ever there was proof of miracles, there you have it.

Some mark on your body that you would’ve never ordered, but reminds you each day of some miracle in your life.

The stretch marks from when you birthed your babies.

The zipper scar from the surgery you survived.

The bald spot in your eyebrow from a collision with your brother when you were kids.

The tattoos of life.

So ugly and beautiful all at the same time.

I’ve shown you mine.

Now, I’d love to hear about yours.

Please catch my newspaper column each week in the Atlanta Journal Constitution, the Dayton Daily News and other newspapers across Ohio.

The Tattoo I Never Planned On Getting

by DarynKagan time to read: 2 min
Life Lessons Took Me Long Time To Learn Seasonal Confession: What No One Dares To Say This…
Family My Tears Have A Clock Of Their Own; Yours, Too?
1
%d bloggers like this: